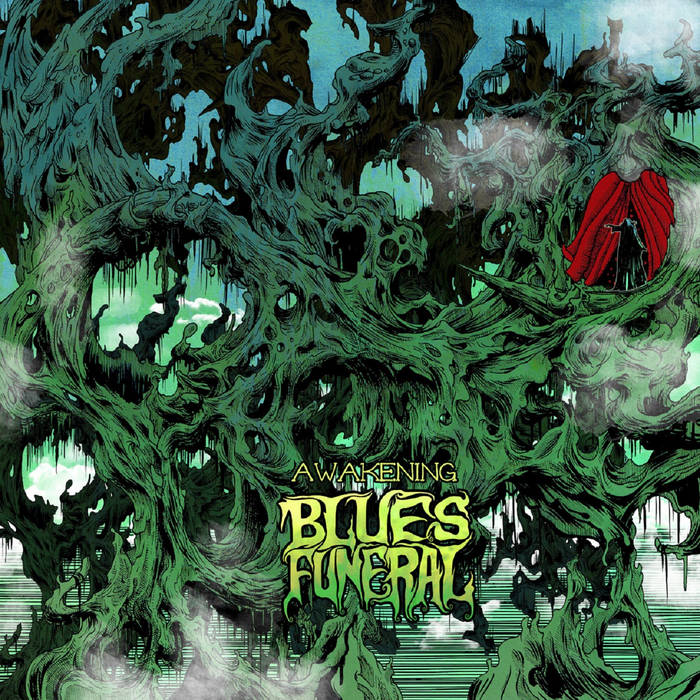 Rock Man (Dave Proger) Blues Funeral does it again... Album of the year canidate for the second year in a row!!! Listen at extreme volume for maximum enjoyment!!!

JD Quenzer 'The Search' was one of my favourite albums of last year so I naturally hit "Buy Album" without listening. 'Awakening' is hitting all the buttons I expected it would and, although it's too early to pick a favourite track, it's clear Blues Funeral have once again produced what will be an Album of the Year on my radio show, Into The Void on Astro Radio.

'Awakening' was written and arranged through the months of July 2016 - April 2017. The music on this record is a continuation of the musical themes present on their debut outing, The Search. Guitar and vocal harmonies, organ swells, thundering drums, and groovy bass lines define the sound while being rooted in a vision of music that was born out of the 60’s and 70’s (think Cream, Deep Purple, and Uriah Heep but with a cross section of Candlemass for good measure). Awakening goes as far as to explore elements of world music and jazz while still maintaining a firm footing in Blues Funeral’s trademark hard rock and metal sensibilities.

Recorded and Mixed May 2017 - June 2017 at Lucky Run Studios in Houston, TX.
Mastered by Collin Jordan at The Boiler Room in Chicago, IL.
Artwork and layout by: David Paul Seymour

"Given the progressive feel they elicit throughout, that underlying consciousness couldn’t be more appropriate, and it is one more way in which Blues Funeral earn the listener’s trust in terms of the moves they make here and, invariably, those that will follow their next time out." - JJ Koczan, The Obelisk

"What impressed me most about “Awakening” was the whole package. The harmonious vocals, the lofty guitar leads with earthy rhythms and the drums that gives the music a heart. This music took me back to listening to the late nights listening rebroadcasts of “The King Biscuit Flower Hour” on the local Classic Rock station were I was schooled on rock as a teen." - Terry Cuyler, TasteNation LLC

"With 'Awakening' Blues Funeral has produced an album that is far more relaxed than it's predecessor, each track seamlessly, and smoothly melds into the next." - Steve Woodier, Shrieks From Below

"With every listen, Awakening gets better and more impressive." - Papa Paul, Doomed & Stoned

"All in all, with the compelling guitar lines at the forefront, Blues Funeral's 21st century take on classic retro, metal-infused, heavy rock is both creative and entertaining. Don't miss this one. Easily recommended." - Craig Hartranft, Dangerdog

"Such attention to the details most people probably never notice further ensures a level of quality that may surprise you. Not only is the music masterfully played, but nothing overpowers the composition." - Ernesto Aguilar, Sludgelord

"While you can say this album is a perfect continuation of their debut, for my money Awakening is a grand leap forward, as they showcase their instrumental virtuosity even further, embrace their influences more closely, and taken their songwriting skills easily to the next level." - Pete Pardo, Sea of Tranquility

"Blues Funeral has a powerful raw sound that inches it’s way into the doom genre and is drenched with bluesy guitar riffs. Their sound is unique and a blend of so many different influences. The vocal harmonies are a powerful bait that hooks you and drags you into their sound. There is an ambiance within their music, it’s like a landscape mural you want to get lost in. By far one of the most diverse and vibrant releases of the year."- Fist, MetalNexus

"The production is handled superbly well with the album striking the right balance between the quieter and louder parts of the album. Awakening is a superb album and Blues Funeral should have no trouble in finding a dedicated audience within the Hard Rock/Classic Rock/Heavy Metal community." - Steve Howe, Outlaws of the Sun

Following a temporary hiatus for Sanctus Bellum in November of 2014, Sanctus Bellum members, Jan Kimmel, Cory Cousins, and Maurice
Eggenschwiler immediately formed Blues Funeral
recruiting Gabe Katz on bass, and spent the next several
months writing.
This has culminated into a diverse array of proto-metal
and progressive rock very much steeped in a vision of the music from the 60’s and 70’s. ... more

Bandcamp Daily  your guide to the world of Bandcamp

outré black metal, with a Victory Over the Sun interview and music from Liturgy and Jute Gyte.